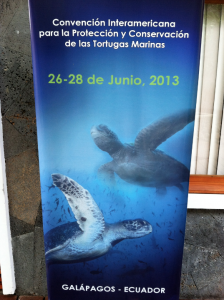 The second day of the Inter-American Convention’s Sixth Conference began with the Consultative Committee of Experts Report.  The Consultative Committee is comprised of elected sea turtle experts who come from three fields: related non-governmental organizations, marine industry members, and oceanographic scientists. The committee pursues leading research studies relating to sea turtles in order to make resolution recommendations at the Convention. The committee met twice since the last conference; one meeting was held via video conference, which sparked a debate as to the usefulness of video conferencing for international discussions. The Convention admired the technological advances that save travel time and expense for widely dispersed participants. However, they noted  diplomacy always benefited from the personal interaction that promotes understanding and agreement between parties with different perspectives.

The Consultative Committee’s review of the member countries resolution compliance was pleased to see active work creating pertinent legislation for sea turtles. The committee found it especially important that almost two-thirds of the countries had enforced legislation to protect the Eastern Pacific Leatherback. The committee had recommended securing nesting beaches, reducing mortality from fishery bycatch, and leveraging regional conservation. The graph below, created by the Consultative Committee, highlights the perils facing this turtle species population, despite newly effective measures. 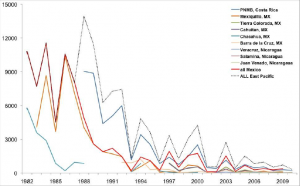 The conference proceeded with finance resolutions, mostly technical. The budget was generally approved as it stands, but there was an effort to encourage more member countries to contribute financially.  The Convention sees all of its members as equals and hoped the countries yet to contribute would become financially involved.

Following finance resolutions were the exception resolutions. The Convention permits countries to seek exceptions from banned sea turtle egg harvesting if special circumstances exist, and so Panama petitioned for the Convention’s first exception. The Panamanian delegate hoped to have harvesting permitted on some of Panama’s beaches in return for greater protection of others.  His argument focused on the cultural importance of egg consumption for indigenous groups and the economic dependence that local communities had on gathering eggs. He also showed how enforcing a complete ban had proved nearly impossible because the harvesting was so ingrained in some societies. The Convention agreed to permit the exception, but required that Panama provide more awareness to indigenous peoples on the perils facing the sea turtle. The Convention also required Panama to statistically show how many beaches were being protected to insure it was worth making the exception.  The Panamanian delegate accepted these conditions. Before the mid-day break the Convention also debated the Sargasso Sea Alliance, which is discussed later.

After lunch, the Convention debated how the legal status of the Secretariat should be established, which was intrinsically tied to who will host the secretariat. After having the night to discuss the legal personality options, most of the countries definitively stood against establishing an international personality (see option 1). The majority of the countries had decided a headquarters agreement (see option 2) was the best course of action for the Convention; however, the Convention requires consensus for any final decisions. Panama’s and Costa Rica’s delegations felt they couldn’t obligate their countries to option 2 without consulting with their respective capitals. Although Panama and Costa Rica were both optimistic that option 2 would be accepted (as the intention of establishing a permanent secretariat was part of the original wording of the Convention’s treaty), they couldn’t agree at the moment. Therefore, the Convention regrettably had to postpone a final decision on legal personality. There was hope Costa Rica and Panama would approve, and the decision could be finalized inter-sessionally  (before the next conference).

The Convention finished the day by discussing how to treat the current proposals to host in light of a leaning toward, but not decision for, a headquarters agreement (option 2.) The primary concern was that a proposal couldn’t be formally accepted until the legal personality was established by resolution. There was also concern over the late proposal of Ecuador to host as their offer lacked details that would be necessary to assess them as a viable host. Delegates tossed around ideas such as ranking the proposals by favored voting to assess how participants were leaning or only continuing to look at the proposals compatible with option 2. At day’s end, the only action was to suggest that the Legal Working Group (the Convention’s collection of law experts) should create a mechanism for reaching a decision through consensus. After afternoon hours of debate, the matter was again tabled for the night.