Sustany® Foundation presents a check to The Friends of Clean City 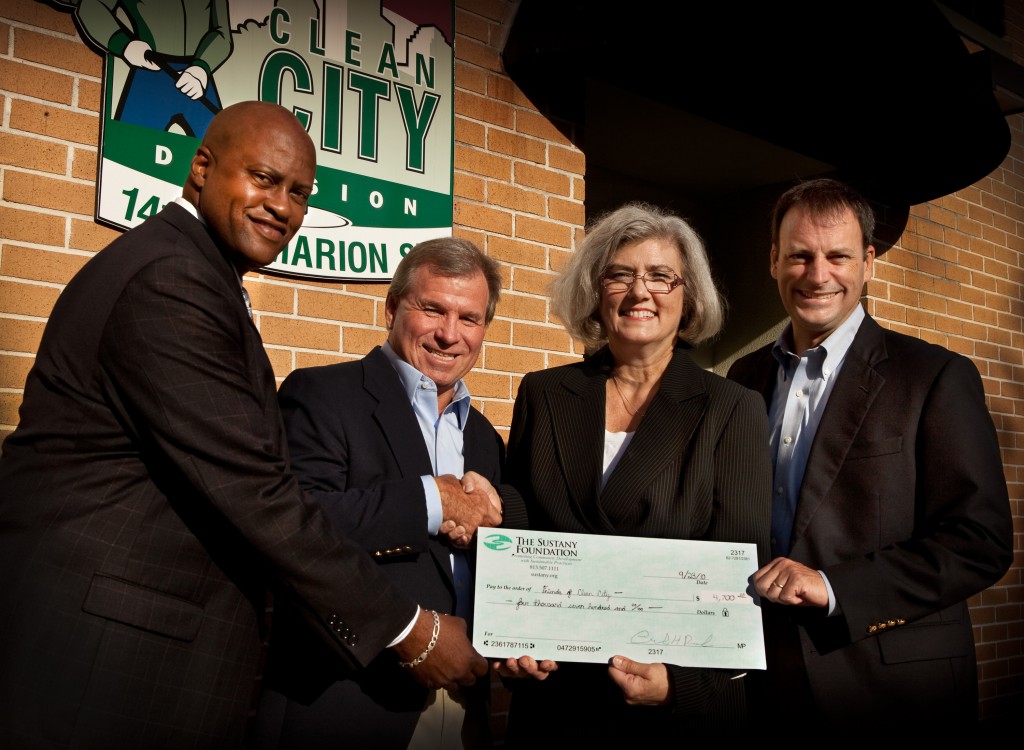 The Sustany® Foundation presents a check for $4,700 to The Friends of Clean City

Sustany® Partners with The Friends of Clean City and the City of Tampa
The Sustany® Foundation, in partnership with The Friends of Clean City, organization and the Clean City Division of the City of Tampa helped support and sponsor the 2010 Tampa Clean City Day event.  Individuals, groups and organizations from both public and private sectors in Tampa who share a common vision for a cleaner city environment participated in the event.
Actual project events and activities were held on March 20th at several sites the 166 square mile perimeter which makes up the city of Tampa.  The numerous sites of the morning clean-up event included sites throughout the city including East Tampa, New Tampa, North Tampa, South Tampa and West Tampa.  Activities included beautification projects, school clean-up efforts, Adopt-A-Street clean-up Programs, waterway and river front clean-ups, and awareness about dumping, trash and recycling city-wide. Ultimately, these are all critical to the preservation and sustainability of the city, Tampa’s urban/suburban sectors, and ultimately the Hillsborough River watershed and Tampa Bay.
A second part of the event was held in an afternoon ‘Clean City Festival’ in Raymond James Stadium.  The Tampa Clean City Day involved some 40 vendors, plus events and educational activities.  The Sustany® Foundation, with The City of Tampa’s Clean City Division and FOCC supported the “Tampa Clean City Day” event by organizing and sponsoring multiple activities, including waterway and river front clean-ups, beatification projects, educational information sharing and demonstrations (including an electric boat) at an afternoon Celebration Festival at Raymond James Stadium which included music, lunch, and youth activities.  Attendees were able to participate, stopping at several booths with a focus on information sharing and demonstrations about ‘going green,’ sustainability, pollution, dumping, recycling and its effects on the environment.   At various booths, including the Sustany® booth, attendees were informed of the relationships between litter, pollution and urbanization and its effects on natural systems and water quality, including the Hillsborough River and the relationships between the river, the environment, and the sustainability of the Bay area.
In the March 2010 event approximately 3,000 volunteers participated, and over 70 local area businesses and organizations partnered and participated in some capacity making this one of Tampa’s largest community volunteer efforts, focused on the cleaning the environment.
The Clean City Day initiative was originally designed to support beautification projects, clean up efforts and recycling awareness.  Tampa’s Clean City division’s goal is to become one of the Top 5 ‘Treasured Cities’ within the United States, enhancing Tampa’s quality of life, economic development, while providing a more aesthetically pleasing city.  In 2005, Tampa was ranked #31 by Reader’s Digest on their list of Cleanest Cities in the United States. In 2008, Tampa achieved its goal of being ranked as one of the Top 10 Cleanest Cities (#8) by Forbes Magazine on their list of Cleanest Cities.
The 2010 Tampa Clean City Day netted approximately 3 tons of litter and recyclables!

Brian Curry and David Reed of The Sustany® Foundation present a check for $4,700 to Sue Ellen Sexton and The Friends of Clean City as Jim Pinkney, Clean City Division looks on.