Even though the Solar Amendment looks like a good thing at first glance….take another look. 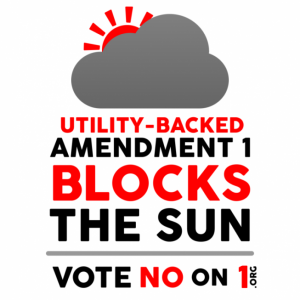 Florida voters interested in solar power have had a confusing year in 2016, evaluating three proposed amendments to the state constitution and deciding to how to vote on the two that have made it to the ballot box.

The most immediate concern is Amendment 1, which will appear on the November ballot. As noted by the Tampa Bay Times (here) “It is backed by the utilities and opposed by renewable energy advocates. The misnamed Consumers for Smart Solar will be Amendment 1 and would merely enshrine into the Constitution the unfair playing field that already exists in the power

market. It restates the options current law provides in allowing property owners to place solar equipment on their property. But unlike a competing amendment that would have opened the market, whose sponsors have been forced to wait until 2018, the industry-backed proposal does nothing to expand consumer choice, competitive pricing or any other benefits of a truly open market. The measure was intended to mislead voters and block the pro-solar power amendment all along.”

For the future, solar energy supporters are hoping that a proposed amendment developed by a non-profit organization, Floridians for Solar Choice (http://www.flsolarchoice.org/about/), will be placed on the ballot in coming years. Currently, Florida is one of only a handful of states that makes it illegal for entities other than utilities to sell electricity directly to consumers (see here) ,effectively banning sales to consumers by solar installation companies such as SolarCity and discouraging their presence in the state. In 2016 Floridians for Solar Choice developed the“Florida Right to Produce and Sell Solar Energy Initiative” to eliminate that situation by providing businesses and individuals with a constitutional right to produce up to two megawatt sof solar power and sell that power directly to others at the same or contiguous property. The right would be secured by limiting government and electrical utilities’; abilities to impose barriers to supplying local solar electricity. However, the proposed amendment did not receive a sufficient number of voter petitions to allow it to be included on the 2016 ballot. The organization remains active, continues to solicit petition signatures (see here), and is hoping to have their measure on the ballot as an amendment to the state constitution in 2018.

And from the recent past, solar supporters can be pleased about the approval of Amendment 4, which was on the August 2016 ballot and passed by a 73 percent to 27 percent margin. As noted by the Tampa Bay Times (here) prior to the election, “Legislators unanimously voted to place [the] constitutional amendment on that ballot [to] provide tax breaks to property owners who install solar. The measure is a good start at creating cleaner and more affordable energy, and voters should approve it. The amendment would repeal personal property taxes on solar energy equipment, and exempt for 20 years real estate taxes on solar devices. It is primarily aimed at businesses, and the goal is to expand the market for solar by making it cheaper on the front end to lease and install the equipment and more cost effective over time to switch to renewable energy. The legislative measure also could be a starting point for a more assertive solar policy.”